Dr. Manos is a scientist, professor, writer, mentor, activist, and adventurer. She resides in Marin County, California, surrounded by oak and redwood trees.

Contact her
Michele grew up in Flint, Michigan and was nourished by its rich educational and cultural programs of the 1960's (and her large extended family's gregarious affection and fabulous Greek cooking). She fell in love with Tucson as a teenager and ventured there to complete her undergraduate degree. Her doctoral work led her to Cold Spring Harbor Laboratory, New York, where she studied with the beloved Yasha Gluzman. Other mentors there included Barbara McClintock, Joseph Sambrook, and Steve Hughes. Her first scientific positions were at Cetus Corporation (Bay Area), during the golden years of biotechnology. There she began her seminal work on the role of human papillomaviruses in cervical cancer, which continued during her subsequent 3 years at Johns Hopkins, and later back in the Bay Area at Kaiser Permanente's Division of Research. Leter research focused on viral hepatitis C and B, and on zoonotic diseases. Her recent interests include climate change preparedness and resilience. A virologist, epidemiologist and veterinarian, Michele has been actively following every aspect of the SARS-CoV-2 pandemic and providing her expertise and recommendations to a spectrum of organizations.

From 2014-2016, in a consulting role, she created and led the Pima County (AZ) Health Department's program to understand and tackle the effects of climate change on public health. Most recently an Adjunct Professor of Epidemiology at the Johns Hopkins Bloomberg School of Public Health, she has also mentored MPH candidates and other trainees at the University of Arizona.

Michele is a desert rat at heart, and she loved exploring the Sky Islands of southern Arizona. Now she enjoys being close to the Pacific Ocean, with plenty of walking trails nearby. She's an avid traveler who enjoys as much cultural immersion as possible in her journeys. Walking and hiking to stay fit, she relies on Iyengar Yoga to stay calm. She devours far too much political analysis, but balances it with good novels and non-fiction. Her urban escapes include independent film, live theater and music, museums, and creative cuisine. She's a festival enthusiast, and particularly enjoys the NOLA French Quarter Festival (as a dedicated volunteer), the Mill Valley Film Festival, and the amazing Edinburgh Festivals (especially the Fringe and the Book Festival).

As a Facilitator of the therapeutic art process, SoulCollage®, Michele offers unique retreats, workshops and online courses to adventurous souls seeking their inner wisdom and to other trained Facilitators pursuing professional development.

She supports organizations focused on women's rights, immigrant rights, voting rights, environmental protection and justice, and public media. Her favorites include Planned Parenthood Federation of America; The Southern Poverty Law Center; KQED; Sierra Club's Borderlands programs, and Canal Alliance, San Rafael, CA (where she served on the Board of Directors). She is a member of the Nativity of Christ Greek Orthodox Church parish in Novato, CA.

While in Arizona, Michele was a Democratic Precinct Committeeperson in LD2 #193, Chair of the LD2 Democratic Committee, and Chair of the Arizona Democratic Party Rules C0mmittee.  She considers herself a pragmatic progressive, and dedicates much of her time to building the Democratic Party and electing Democrats who share her ideals. Once she's settled back in Marin County, she'll see what political activities might await her there.

* I just LOVE that one.  Have you ever attempted to capture and restrain an angry coyote using only a blanket? Or grab a gila monster behind the neck faster than it can bite you? What fun.
VIEW HER CURRICULUM VITAE 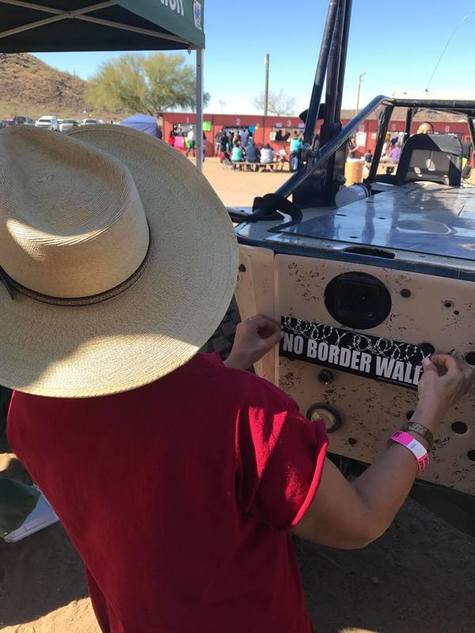